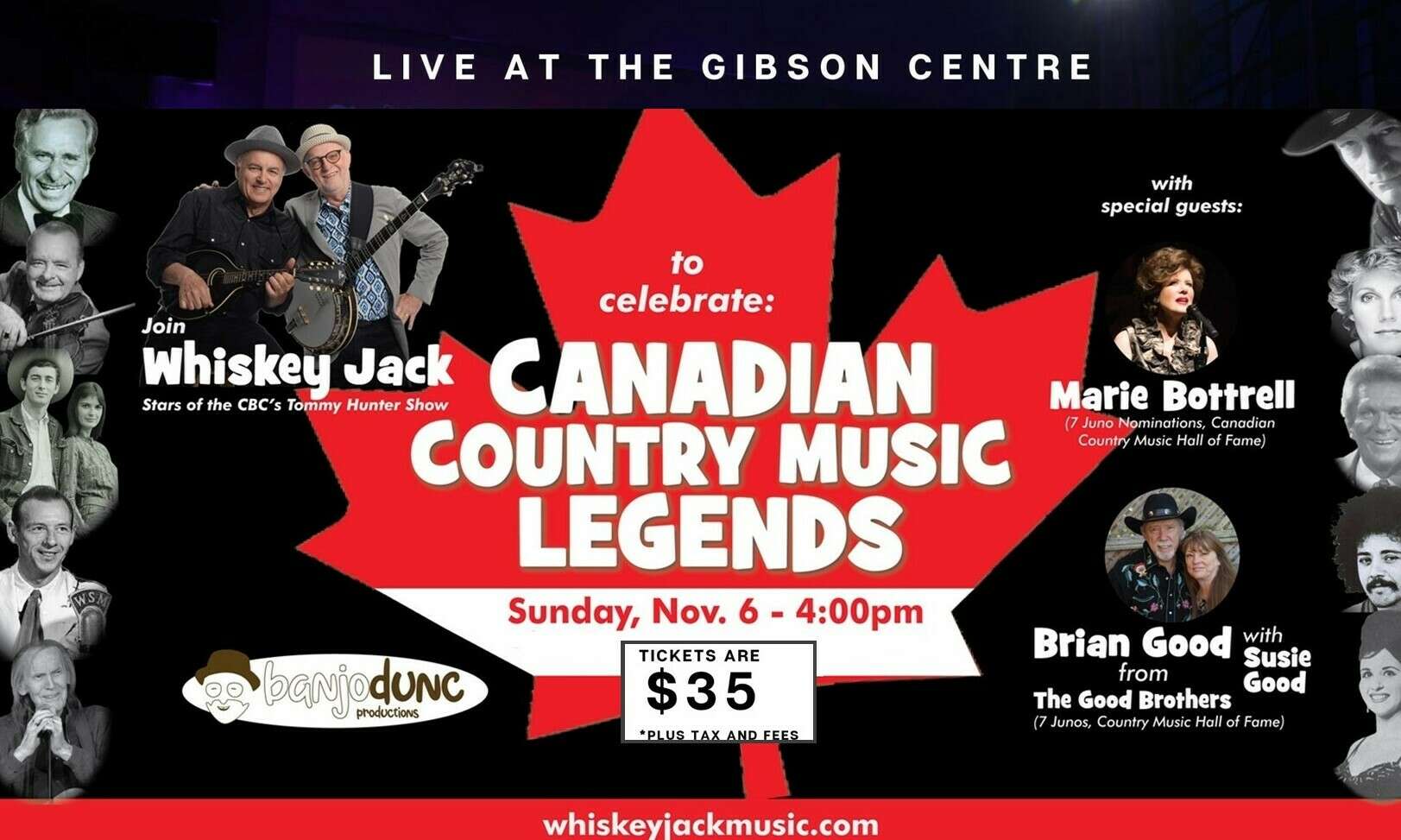 This show is conceived and presented with more love, respect, admiration and gratitude than any normal human being can reasonably muster on any particular day.

George Harrison sang it best: "You won't know where you're going, if you don't know where you've been". Here we are in 2022, and with Duncan Fremlin and Whiskey Jack celebrating 45 years as a musical force in the Canadian country music community, it's only natural that we reminisce about the old days, exploring where we've been.

If there's one thing Covid gave us, it was time to reminisce. As cast members of the CBC's Tommy Hunter Show for many years, Duncan and his band revisit stories, songs and skits they performed with Tommy, Gordie Tapp, Al Cherny and more. Who can forget Gordie's "Pfffz You Were Gone" on Hee Haw?

Wilf Carter, the father of Canadian country music, began his professional career in 1920 when there were no fancy PA systems, no promoters handing out gigs, no contracts offering assurances that payment would be made when the gig was over, no proprietary rights to the songs he wrote, no record companies to finance and distribute his 78's, no TVs. Wilf had perhaps only one radio station to broadcast his shows and few music stores to sell his records. He travelled from town to town on highways so bad that just getting to a gig was reason to celebrate.

A few years after Wilf took over country music, Hank Snow appeared. And who better to sing their most popular songs than Whiskey Jack's Douglas John Cameron, two time Juno Award nominee for his 1983 hit, Mona With The Children and his 1996 TV hit, Ants in Your Pants. The song most associated with the Wilf legend is the beautiful ballad our parents would listen to when they turned on the radio in the parlour on a Saturday night, Blue Canadian Rockies. Hank, on the other hand, is famous for the most difficult song to sing, I've Been Everywhere.

Marie Bottrell has her own library of road stories having been a pioneer, one of the first, and most definitely the youngest woman to lead her own band on endless tours of North American fairs and theatres. Marie's hard work and exceptional talent earned her 8 Juno nominations. On our show, besides her own hit, The Star, Marie will sing what has become a Canadian national anthem, Snowbird, a song we associate with the legend who wrote it, the late Gene MacLellan and the legend who made it famous, Anne Murray. Brian and Susie Good are the gold standard in their field. Country duets? You bet! One of the songs they'll sing was made famous by their good friends, Ian and Sylvia; Four Strong Winds was voted Best Canadian Song in 2008. Brian, of course, is one of The Good Brothers and their bluegrass hit, Fox On The Run must be on the set list for this show! What you might not know is that Susie learned her chops from another Country Music Royal Family where her dad, Rex Yetman, was a founding member of Canada's very first bluegrass band, The Yorktown Boys.

The link between Wilf and Stompin' Tom Connors is a straight line. According to Tom, "Wilf was my inspiration. That's all there is to it." As the show's producer, raconteur and band leader, Duncan Fremlin says, "I plan to dip into my own 25-year history with Stompin' Tom and sing Bud the Spud. I might even share a story or two from my best-selling book, My Good Times With Stompin' Tom."
The show's supporting cast will also be featured. Stompin' Tom's long-time fiddler from PEI, Billy MacInnis, will show why Don Messer and Al Cherny were important to our country music. Not to be outdone, bass player Tim Hadley is another two time Juno nominee (The Grievous Angels). This show debuted in Wingham, the town many consider the home of Canadian country music. During its 60-year run, the CKNX Barn Dance spawned a generation of performers who almost single-handedly created the soundtrack for the nation - Tommy Hunter for the singers and Al Cherny for the fiddlers. They grabbed the heart of the nation and never let go. So please sit back and join the stars of today as they reminisce and sing the songs made famous by their heroes, Tommy Hunter, Gordie Tapp, Anne Murray, Gordon Lightfoot, Hank Snow, Lucille Starr, Willie P. Bennett and more. Don't sit on your hands. Sing along, clap your hands, wiggle your bottom... do what you have to do. This music is simply impossible to resist.