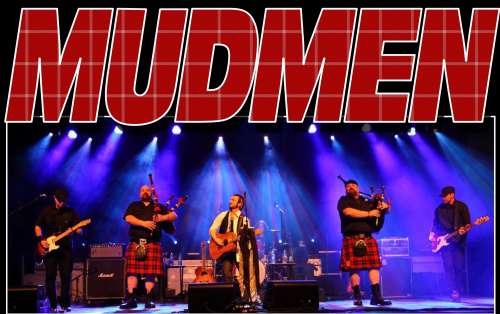 The Mudmen in Concert At The Gibson Centre
May 8th 2015

Always entertaining and definitely unique, The Mudmen are a blast of Celtic energy whose members are known to be characters both on and off the stage. First discovered in 1998 as "The Campbell Brothers" the band signed a deal with EMI Records and changed their name to The Mudmen in the year 2000. Their music has been featured on XBox and Playstation games, NBC's television show "Black Donnellys", WWE Wrestling, Don Cherry's hockey videos, six music videos on Much Music and they reached #19 on the Edge radio.

In 2004 Mudmen were dropped from their label, booking agency and parted ways with management. The band continued to tour, however, and never gave up.

Then in 2008 The Campbell Brothers were asked to perform on the new Hockey Night in Canada theme song where Ron McLean quoted "Mudmen we love 'em!" This lead to many opportunities including a 3 month tour with Johnny Reid, his PBS special and the Canadian Country Music Awards with Johnny.

The Mudmen have since appeared on Parliament Hill for Canada Day where they shook hands with the Queen on television, are currently on the new Hockey Night in Canada theme song, the 2009 Edmonton Oilers Home opener and much more.

They have become much more Celtic allowing them to perform at Country festivals, Celtic Festivals, corporate events and many family events. New members Steve Gore, Mario Bozza, Anthony Albanese and Jeremy Burton have brought new energy, ideas and attitudes that have given new life to the band and they are truly a group of friends who enjoy performing music.

The Mudmen have proven they're around to stay and are on the rise again. They believe that nice guys finish first and enjoying life and what you do translates to all audiences.